Unlike President Obama, who gives first priority to terrorism, Iran, and North Korea, President Trump labeled conventional security challenges posed by Russia and China as prime threats, which signals a fundamental change in America’s threat judgment. It not only increases the possibility of confrontation and conflict between China and the U.S., but also explains the reason why Trump stages a trade war against China. 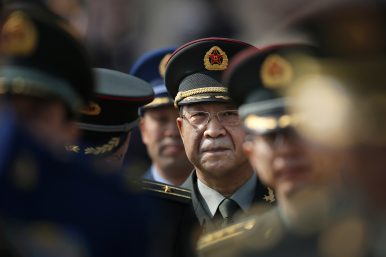 So said Luo Yuan, executive vice president and secretary general of the China Strategic Culture Promotion Association, in the press conference for the release of the annual report reviewing U.S. military power.

Retired Army Major General Luo Yuan is widely regarded as a key figure among Chinese “military hawks” for his hardline opinions against the United States and its allies like Japan. His frequent appearances on national television and his hundreds of thousands of followers on Sina Weibo (the Chinese parallel to Twitter) have given his strong influence both on traditional and online media. Previously, Luo’s hawkish opinions on China’s territory disputes with Japan had raised great concerns both domestically and internationally.

Luo Yuan now leads the China Strategic Culture Promotion Association, which is a Beijing-based think tank composed of scholars and retired officials. This year marked the seventh annual release of the organization’s report reviewing U.S. military power. Unlike previous years, this year’s report attaches great importance to the changing reality of U.S. security strategy. In particular, the report noted that it’s the first time the United States has identified China as America’s chief security threat since the two countries re-established bilateral diplomatic relations. More importantly, they see the ongoing trade war as a part of Trump’s U.S.-China strategy, which might usher in a new Cold War.

The report highlights several game-changing facts regarding U.S.-China relations based on an analysis of documents issued by the Trump administration, including the National Security Strategy, National Defense Strategy Summary, and Nuclear Posture Review.

First and the foremost, the report points out that President Donald Trump elevated his campaign slogan, “America First,” into a national security strategy and his administration’s guideline. Luo perceived it as a clear sign of a shift from multilateralism to unilateralism. The impact will inevitably ripple throughout every aspect of China-U.S. relations.

Second, the report argues that China is ranked the foremost strategic threat to the United States, even before Russia, owing to the fact that China (33 times) is mentioned significantly more than Russia (20 times) in Trump’ National Security Strategy. Moreover, China and Russia are both named revisionist states, which challenge U.S. power, influence, and interests, attempting to erode U.S. security and prosperity.

From Luo Yuan’s perspective, the changes mentioned above demonstrate that Trump has reversed Obama’s policy by deeming conventional security threats posed by China and Russia as major threats, while unconventional security threats like terrorism are secondary threats. China’s being listed before Russia as the chief threat shows a clear sign of fundamental change in threat judgment. As a result, the probability of confrontation and conflict between China and the United States is growing higher.

Third, a more confrontational U.S. foreign policy could also be seen from the replacement of 20 years’ of engagement strategy with a competitive strategy, according to Luo. This remarkable shift is very likely to encourage the competition between the United States and its opponents in every field including politics, economy, military and diplomacy. Thus, the constructively cooperative relationship between China and the United States turn into a zero-sum game featuring frictions and confrontations, for which China has to become prepared.

To implement such a competitive strategy, the Trump administration substitute Obama’s Rebalancing Strategy with its own Indo-Pacific Strategy and South Asia and Central Asia Strategy. “It implies that the competition between China and the U.S. would expand from western Pacific to the whole Pacific Ocean, the Indian Ocean, South Asia and Central Asia,” said Luo. He believes the new strategy would emphasize the alliance of the U.S., Japan, Australia, and India, while increasing the friction and confrontation between China and the United States and its allies. China in turn has to face a more challenging international security environment.

Furthermore, since Trump is rebuilding U.S. military capabilities by increasing the defense budget and military personnel, as well as modernizing U.S. nuclear power and infrastructure, it will eventually present a huge challenge to China’s national security, defense budget, and military strength.

Given this, Luo drew the conclusion that Trump’s National Security Strategy is a reflection of his Cold War and zero-sum way of thinking. The strategy’s implementation would not only deeply influence U.S. domestic and foreign policies but also influence, to a certain extent, the strategic structure of the world.

Yet, when asked if China should respond by adopting a more confrontational approach, Luo argued that China should neither adhere to an “ostrich policy” by ignoring reality nor believe that the United States still sees China as a friendly country and wants to establish new type of major power relationship.

“It takes two to tango. We should not only consider what we think, but also what the U.S. thinks as well,” Luo said. “The U.S. termed China as chief security threat, so we must have our own strategy to deal with it. As Chinese saying goes, never think about hurting others but always keep an eye open on others. Thus, we need to have strategic composure and confidence rather than being shaken by U.S. influence in order to enhance our overall strength and defense capability step by step.”

Fan Gaoyue, a retired senior colonel and former chief specialist at PLA Academy of Military Science, echoed Luo’s thoughts on dealing with U.S.-China relations. He stated that there is no need for China to respond immediately in a tit-for-tat manner, because U.S.-China relations have developed well in the past decades. Despite differences and disputes, the bilateral relationship is in good shape as a whole. Donald Trump is just an exception. If he cannot succeed in the next general election, the continuity of his policy remains unclear. Thus, Fan argued, China has no need to transform a collaborative U.S.-China relationship into a confrontational one, because it doesn’t suit China’s interest of seizing the opportunity of development.

“China should have two-pronged strategy. On one hand, we are not afraid of it if the U.S. takes on China. On the other hand, China won’t take the initiative in changing the collaborative relations with the U.S. Instead, we advocate for constructing new type of great power relations characterized by no conflict, no confrontation, mutual respect, and win-win cooperation,” Fan summarized.

Xiaofeng Wang is a China-based journalist.