Ivory Coast is the main focus, while Chinese loans and contracts also proliferate in French-speaking Senegal, Mali, Niger and Togo.

When Ivory Coast put out a tender to build a bridge over the lagoon in its commercial hub of Abidjan, 10 out of the 18 companies that expressed interest were either Chinese firms or in partnership with them. China State Construction Engineering won the contract in May.

The 109 billion CFA francs (US$191 million) deal highlighted China’s growing muscle in a part of Africa that until recently its businesspeople showed little interest in: the French-speaking west.

The area’s fast-growing economies have seen a spectacular rise in loans from China, with its companies competing with firms from France for big infrastructure projects.

“They used to think that the French controlled everything,” said Dominique Banny, director of corporate and investment banking at Stanbic Bank, a subsidiary of Standard Bank, Africa’s biggest lender by assets.

“Now, we see more and more Chinese companies scouting for projects in French-speaking Africa, with delegations arriving every two months.”

Loans from China to Ivory Coast surged in the first five years of this decade by 1,400 per cent, to a total of US$2.5 billion, and 1,268 per cent to Senegal, reaching almost $1.4 billion, according to data compiled by the China Africa Research Initiative at the Johns Hopkins University in Washington in 2015, the most recent year for which data is available.

While Chinese companies are also working in former French colonies such as Mali, Niger and Togo, their main focus in the region now is Ivory Coast.

It initially missed out on China’s investment boom in Africa because of a violent political conflict that ended in 2011.

Now, it is catching up as the government focuses on infrastructure and energy projects to boost a US$40 billion economy that has expanded an average 8 per cent per year since 2012. 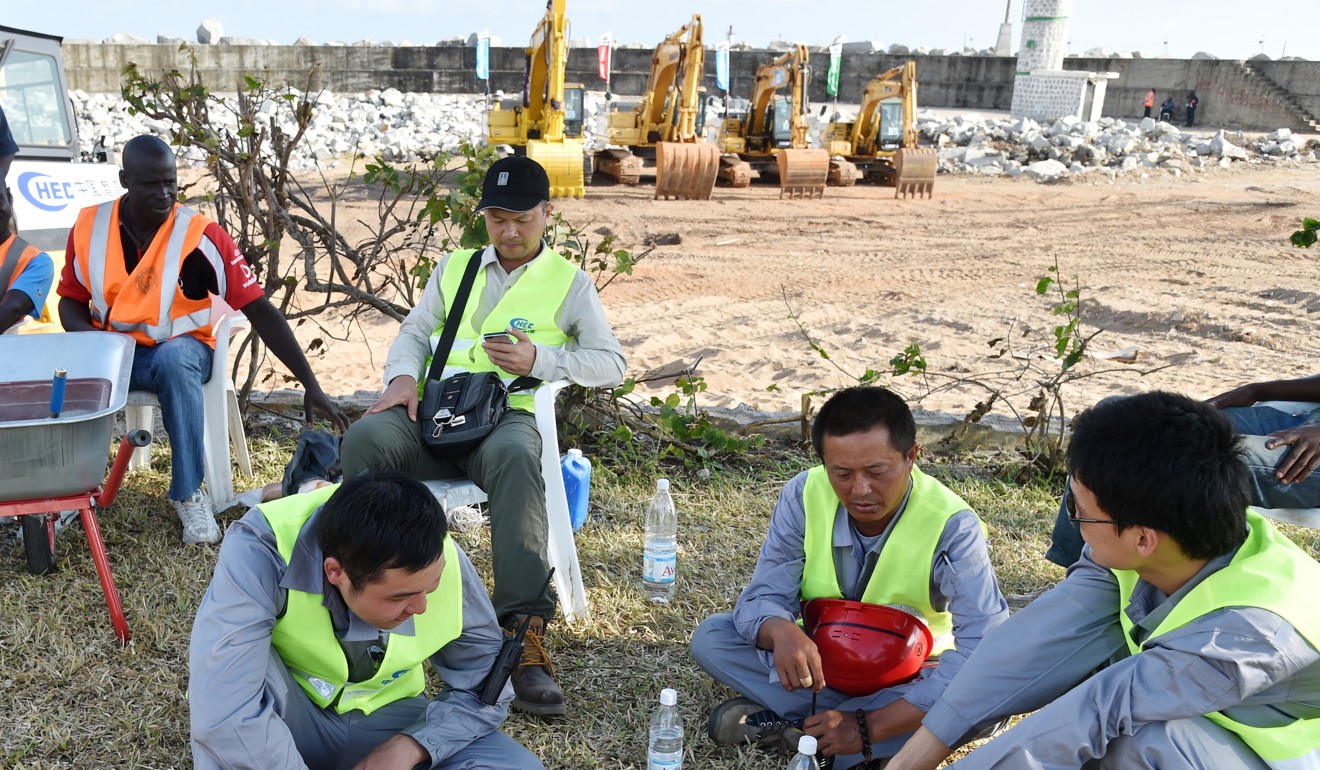 And as the Chinese come, West African officials and engineers are doing their homework. They have followed the experience of big-ticket investment destinations such as Angola, where Chinese companies have been criticised for using their own workers and supplies almost exclusively to complete projects and providing little opportunity for local employment and businesses.

When Ivory Coast awarded a US$580 million contract for one of President Alassane Ouattara’s flagship projects and its first hydropower dam in decades to China’s state-run Sinohydro, the authorities set conditions: the working language was to be French, only 20 per cent of the workforce could be Chinese and building material such as cement had to be bought locally.

“We made sure we made our demands clear from the start,” said Maxime Balet, the 42-year-old project head at the Soubre dam, as he stood near the towering trash rake that removes water hyacinths.

“We went to see similar projects in Africa to collect information about the way Chinese companies work and on the issues that could arise.”

There have been difficult moments. Ivorian engineers had to sometimes interpret gestures and facial expressions to figure out what their Chinese counterparts were saying, Balet said. Even today, the Chinese and Ivorian employees have separate canteens, and after sunset it is rare for a Chinese worker to be seen in the neon-lit bar on the staff compound.

Completed ahead of schedule, the Soubre dam is a huge source of pride for the engineers who are preparing to take over operations from the handful of Chinese still at the site.

The 4km (2.5-mile) dam, the country’s largest, has added 275 megawatts to the national power grid and will cement Ivory Coast’s rank as the region’s main electricity exporter. The Export-Import Bank of China provided 85 per cent of the funding, with the Ivorian state contributing the rest. 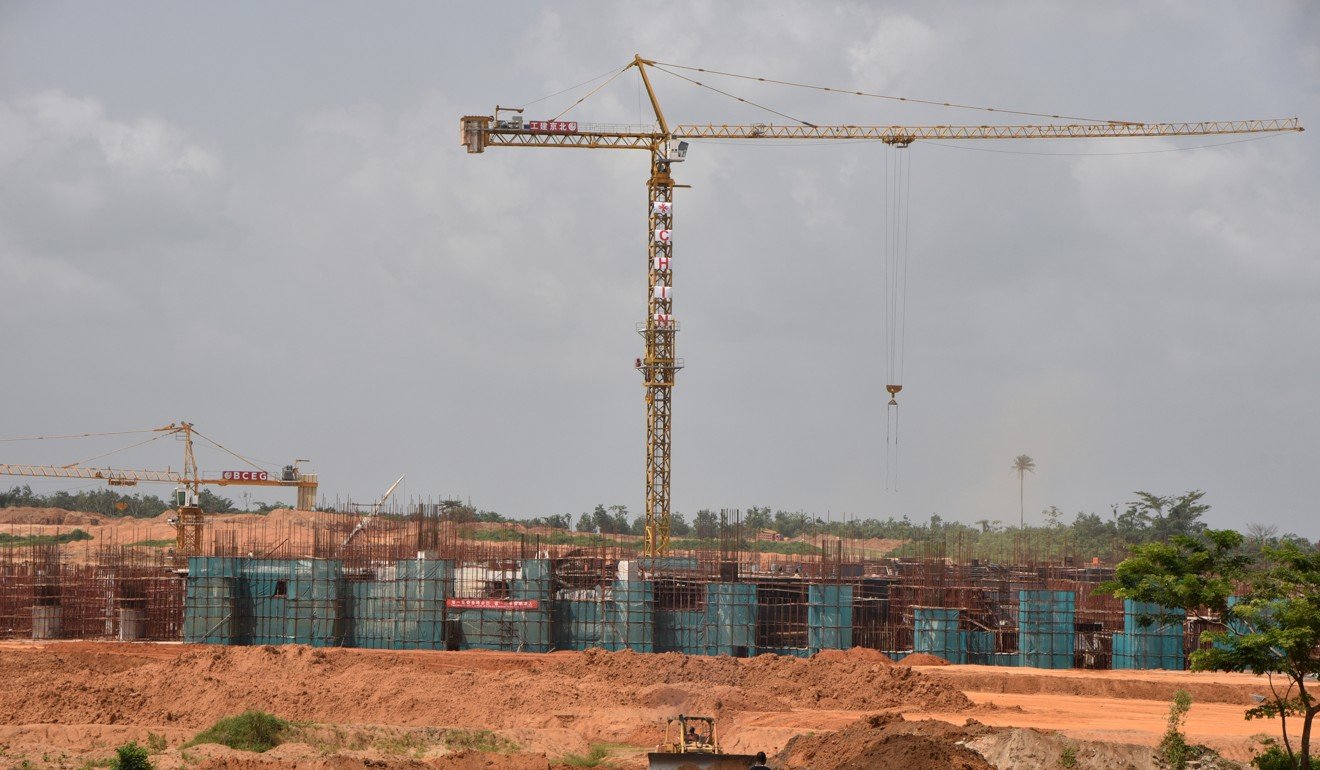 The deepening involvement in Ivory Coast and the rest of the region marks a key step in China’s expanding footprint in the continent that ranges from offering scholarships to African academics to contributing Chinese peacekeepers to United Nations missions in South Sudan and Mali.

Africa is also part of the Belt and Road Initiative that calls for half a trillion dollars in investment in infrastructure along trade routes to China, which is expected to overtake the US as the world’s largest economy before 2030.

“It’s the first project for us in Ivory Coast,” said Sinohydro’s deputy executive director on the project, Wang Xianping, through a Chinese interpreter.

“We tried to get familiar with the country from the project. We hope we can take on more projects but it depends on some things, including funding.”

Work on a smaller, second dam nearby has already started, even though the formal contract hasn’t been signed yet. At least two more dams may follow.

Yet, since then, Chinese companies have obtained contracts to build soccer stadiums, a port expansion, drinking water facility and a coastal highway between Abidjan and the resort town Grand Bassam.

That is in addition to the deal for the new bridge across the lagoon. No French company even made the shortlist.

The Chinese are challenging French domination in other areas as well. Privately held, Beijing-based StarTimes launched a pay-TV service that ended the near-monopoly of Canal+, a unit of French conglomerate Vivendi, two years ago. It has since signed up 100,000 subscribers and prompted Canal+ to cut the cost of its decoder by a third.

In recent years, Chinese entrepreneurs have almost taken over a Lebanese monopoly on the floor-tile business and opened dozens of shops, said Philippe Liu, 52, who was among the first Chinese to arrive 22 years ago and served in the Chamber of Commerce of Chinese Enterprises in Ivory Coast.

“There’s a need for all kinds of products here and we work very hard, and we think that if you work harder than others you can make money,” Liu, wearing a tailor-made African-print shirt, said in fluent French. There’s no official data on the number of Chinese living in the country, Liu said.

“Most Chinese aren’t in touch with the embassy,” he said. “We don’t want to bother them. We’re working for ourselves.”

It is a similar story in Senegal, where the economy grew 7.2 per cent last year. China’s CGC Overseas Construction Group is building an industrial park in a brand-new city outside the capital, Dakar, and China Railway Construction is set to renovate its railways.

Other Chinese-led projects include the construction of a new Foreign Affairs Ministry and the rehabilitation of an ageing dam in the southern Ziguinchor region.

Chinese President Xi Jinping will pay his first-ever visit to Senegal on Saturday to inaugurate a museum of black civilisation.

Like the Soubre dam in Ivory Coast, the idea for the museum dates back to the 1960s, but it wasn’t built until China provided the funds.

“The way of thinking of African leaders changed considerably after they saw they could access a range of services, including financial services, that weren’t available previously and gave them the freedom to set their own terms,” said Thierry Pairault, a senior China analyst at the Paris-based School for Advanced Studies in the Social Sciences.

“They’re seeing that they can shape a narrative that isn’t linked to colonial history, and this is constantly reinforced by what China tells them.”

← The politics of ports in the Horn: War, peace and Red Sea rivalries
What Do China’s Military Hawks Think of Trump? →