Israel has few options in its dealings with HAMAS* and the Gaza Strip. The recent increase in violence has forced the Israelis to order air strikes against targets in the territory and prepare for a ground incursion reminiscent of the operation four years ago.
The number of rockets fired at Israel from the Gaza Strip is quite astounding. To recap, since the end of the fighting in January 2009, there have been more rockets fired each year than the previous year. In 2009, there were 300 fired, in 2010 there were 510 fired, in 2011 there were 615 fired, and thus far in 2012, there have been at least 900 fired. Over 400 of those 900 have been fired in the last week. Over 150 were fired on November 16 alone.
It’s not just the quantity of rockets, it’s the quality. In the fighting in late 2008 and early 2009, the only rockets in the HAMAS inventory were the home-made, not very effective Qassam rockets with range capabilities between three and 12 miles. The short range of the rockets placed the Israeli border cities in jeopardy, especially the city of Sderot. See my article written in January 2009 after I visited Sderot during the fighting, Sderot – Israel’s “Rocket City”.
Since 2009, HAMAS has significantly upgraded its rocket arsenal, acquiring longer range systems from Iran, smuggled in via the Sinai peninsula under the “watchful eyes” of our erstwhile allies, the Egyptians. This includes Iranian Fajr-5 rockets that were used by Hizballah against northern Israel in 2006. The Fajr-5 has a range of almost 45 miles, placing Tel Aviv and Jerusalem in range. 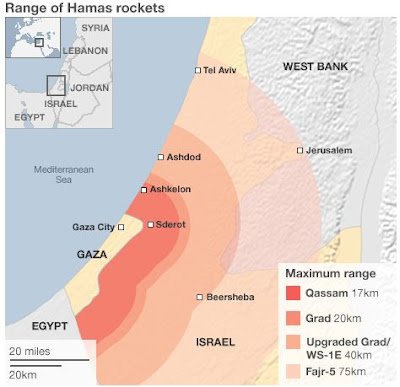 This week, HAMAS crossed an Israeli red line – it fired rockets at Tel Aviv and Jerusalem. Another attack killed three Israelis in the southern city of Qiryat Malachi. It was too much for the Israelis to absorb. It also reinforces the perception among Israelis who live in the southern part of the country that until the people in more upscale Tel Aviv or Jerusalem are threatened, the government ignores the plight of the average Israeli.
The Israelis began a series of air strikes in Gaza. The Israelis have been continuously collecting intelligence on the Gaza Strip – they have a huge catalog of targets to be struck. The initial targets, of course, are the longer range rocket systems, particularly the Fajr-5 launchers. HAMAS is a capable enemy – they are hiding the launchers in mosques, schools and other areas that the Israelis are reluctant to strike. World public opinion is never on the side of the Israelis, so they have to hold themselves to a much higher standard than the Palestinians.
Since many of the launchers may be in areas that cannot be attacked from the air without unacceptable civilian casualties, a ground incursion may be necessary. The Israeli cabinet authorized a call-up of up to 30,000 reservists. Of that, 16,000 have been mobilized. That will free up active duty units to move towards Gaza. The minister of defense is seeking authority to call up as many as 75,000 reservists.
The units that have deployed to the border are among the best in the IDF – the Givati Brigade, the Paratrooper Brigade, and the 401st Armored Brigade. The 401st is equipped with the latest Merkava-4 tank. The quality of troops moving towards Gaza and the reserve call-up indicate how serious Israel is taking the matter, and how likely it is that they will invade Gaza. Mobilizing reservists in a small country like Israel is expensive and disrupts virtually everything. These steps are not taken lightly.
Israel has rushed into service as many Iron Dome anti-missile batteries as it can. The system has been able to defeat dozens of inbound HAMAS rockets. The country is fast assuming a war posture. Likewise, in Gaza, residents are stocking up on food, fuel, water, etc., since they too know that an Israeli incursion is not only possible, but inevitable.
We seem to go through this drill every few years. The Israelis endure as many attacks as they are willing to tolerate, then conduct a punitive operation against Islamist elements in Gaza. Predictably, there will be a huge public outcry of the disproportionate nature of the response, the United Nations will call for a cessation of the violence (that’s code for demanding Israel stop, but not so much the Palestinians), and Israel will stop short of destroying HAMAS’s ability to fire more rockets.
Here we go again.
__________
* HAMAS, (حماس) Arabic for enthusiasm, is an acronym of the Arabic titleحركة المقاومة الاسلامية harakat al-muqawamat al-Islamiyah, the Islamic Resistance Movement.