As may will know, I am quite active on Twitter, especially in financial matters. That’s my day job, plus it has been a treasure trove of good, altruistic good people, many of whom have become friends. I contribute in part to participate, and in part because as much as I give to the community, I receive more in return. You know, the ancient and nowadays deprecated concept of “Interest”, where peasants and Lords alike wanted to actually get paid to voluntarily deprive themselves of their savings.

So, in light of today’s market wobble, I started thinking. The EU has a loooong road ahead to positive rates, as you can see here (source: Bloomberg LP): 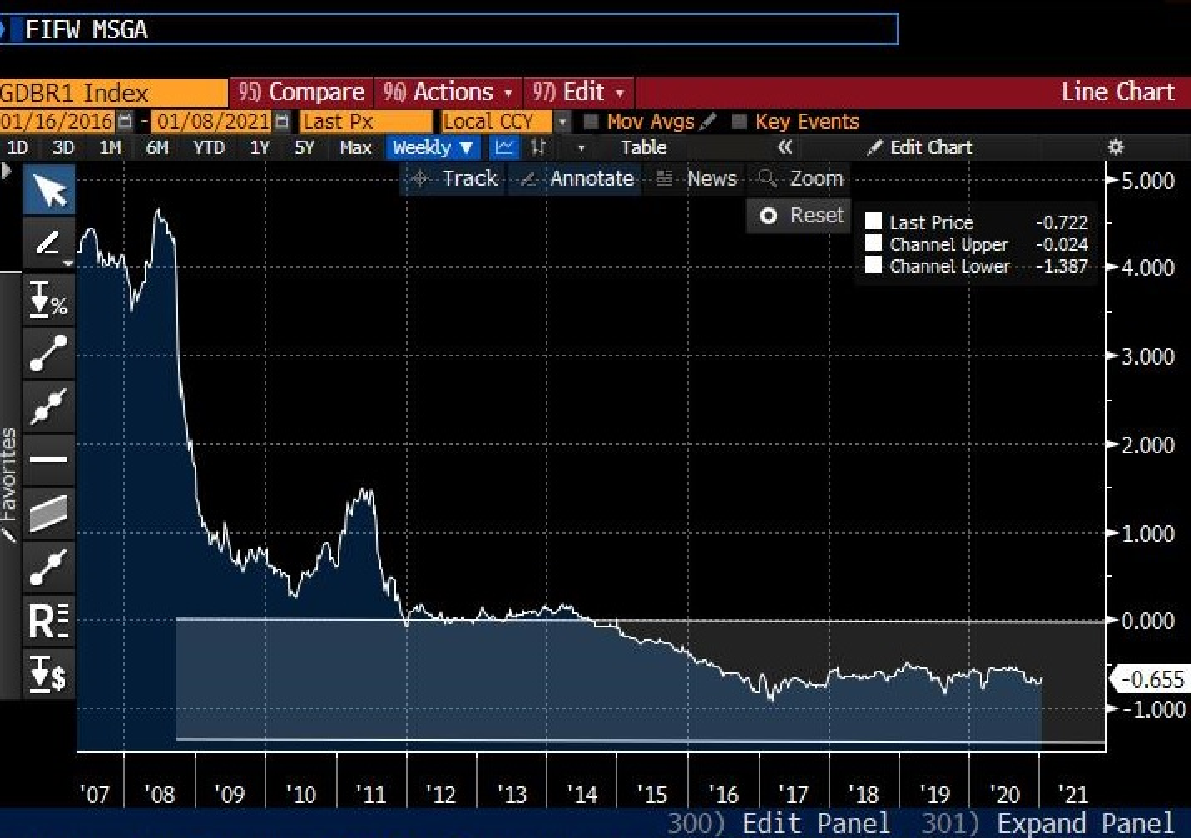 This, coming from Bloomberg as well, is the chart of the total balance sheet of the ECB. As you can see, in the past year alone the central bank has created  the equivalent of an Italy from thin air, which is no mean feat. In fact, like negative rates, that has no comparison in history. 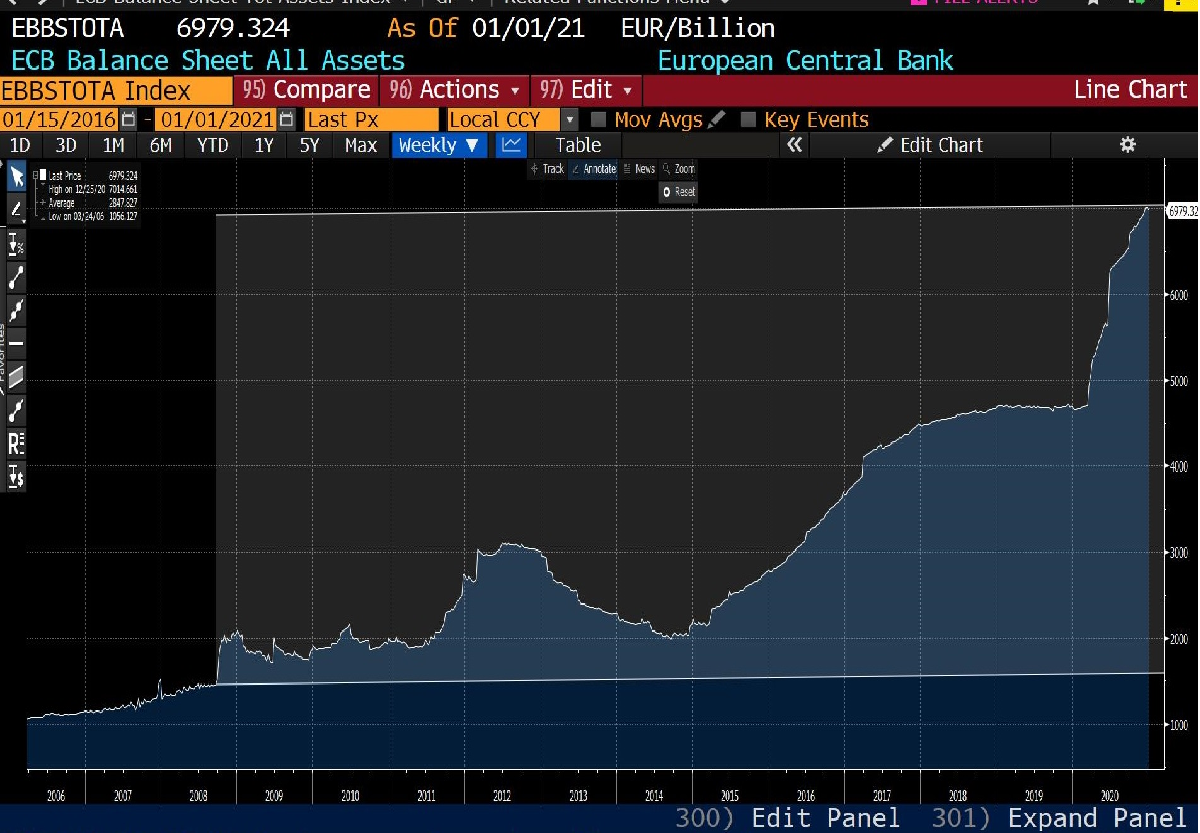 Hence my reference to “Sleeping Beauty”: Europe has fallen asleep under the evil spell, where nothing grows except  debt, which is paid by contracting more debt . From there, extraordinary measures ensue, like Central Bank Digital Currencies, whose only consequence would be to enable Central Banks to transfer negative rates, perhaps even MORE negative rates, directly to final savers and bank depositors.

Let me explain how. Rogoff et. al. Have advocated for even more negative rates in order to jog the economy in a kind of “use them or lose them” fondly remembered by atomic war theorists: Savers would have to pick between leaving their cash balances on their bank balance sheet uninsured, or willingly deposit them at the Central Bank (that is in fact the meaning of “central bank digital money”), at a NEGATIVE rate that will be increasingly punitive to “force” money into the “real” economy to jog inflation to the desired level.

While I like the elegance of putting a price on the “Doom Loop”,  what has occurred to me is that… increasing negative rates might have the same effect of positive rates in SLOWING economic activity instead of pushing it. What if the braking effects of official rates worked more or less like this? 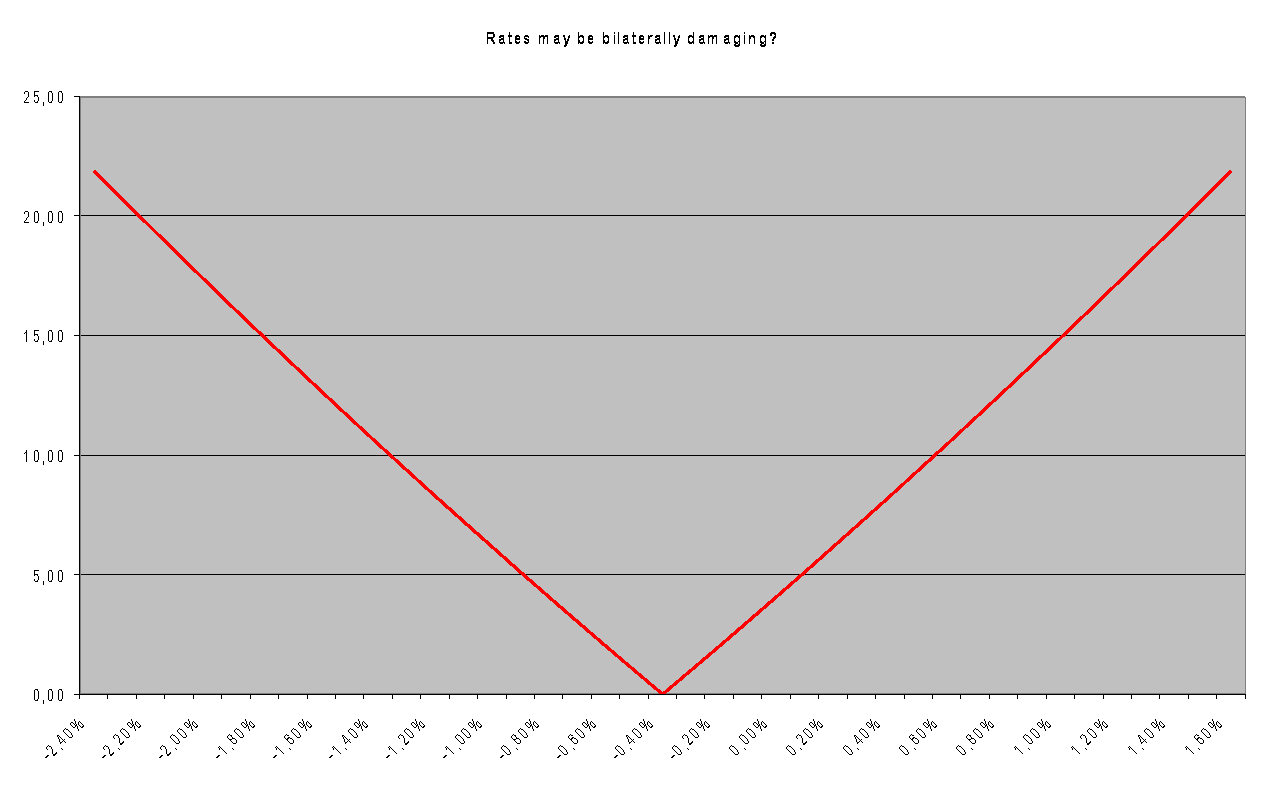 There could be a case for that, you know. For a start, it is highly unlikely that apart from governments and big banks, other entities could finance themselves at negative yields, and that on top of the “big size bias” implicit in that. Your barber or coffee shop would be as starved of capital with a decrease or increase in official rates. A big listed company however could issue stock, counting on expectation of continued monetary pumping.

That’s difference one, the second is more intriguing.

Should rates become positive and rise further, that would mean governments would have to divert spending from pork barrel to savers. With strongly negative rates, the reverse is true: Governments get an increasingly big chunk of an ever smaller pie. New capital formation would go out of the window, since very few new firms would find capital, and anyway governments would soak up much of the possible investors through cockamie schemes…. like the Green New Deal.

This is disproportionately important in Europe. Think about this: free risk rates have reached zero in late 2011, and have been consistently below zero since early 2015.

Now, the essential assumptions behind the Recovery Fund are two, closely linked to one another:

So, the public sector in its infinite wisdom would be able to find investments with returns Allianz would make a deal with the Devil for. And I have a bridge to sell you (actually Italy is discussing a revival of a bridge across the Messina straits, so that is less far-fetched than it sounds).

What do you think will happen to total factor productivity under those circumstances?