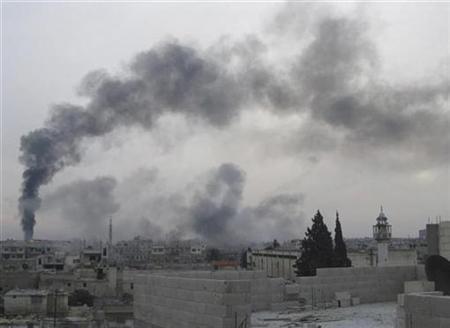 (Reuters) – Syrian President Bashar al-Assad’s forces rained rockets and bombs down on opposition-held neighborhoods of the city of Homs, reducing buildings to rubble and killing more than 80 people, including two Western journalists.

The barrages marked an intensification of a nearly three-week offensive to crush resistance in Homs, one of the focal points of a nationwide uprising against Assad’s 11-year rule, and prompted further international condemnation.

French President Nicolas Sarkozy described the deaths of the two journalists, French photographer Remi Ochlik and American Marie Colvin of Britain’s Sunday Times, as an assassination and said the Assad era had to end.

“That’s enough now,” Sarkozy said. “This regime must go and there is no reason that Syrians don’t have the right to live their lives and choose their destiny freely. If journalists were not there, the massacres would be a lot worse.”

France and Britain demanded that three other Western journalists wounded in the strike on a house in Homs be given the medical care they urgently needed.

More than 60 bodies, both rebel fighters and civilians, were recovered from one area of Homs’ Baba Amro, a Sunni Muslim district opposed to Syria’s Alawite ruling class, after an afternoon bombardment on Wednesday. Some 21 were killed earlier in the day, activists said.

For graphic of Homs link.reuters.com/tuc56s

The two journalists were killed when the house in which they were staying after sneaking over the Lebanese border into Homs was hit by rockets. Sunday Times editor John Witherow said Colvin, a veteran war reporter, and her colleagues may have been deliberately targeted.

“They certainly knew that she was there from her reports and broadcasting. And the question is, could they use technology or other means to identify exactly where she and some other journalists were hiding?” Witherow said on BBC television.

“It seems to me perfectly reasonable to assume that they would have targeted them.”

The last dispatch from Colvin – who wore a trademark black eye-patch since being wounded in Sri Lanka in 2001 – described the misery inside Baba Amro.

Women and children were crammed together into a basement, huddled in fear and a two-year-old child had died in front of her, she reported on British radio.

Bouvier suffered severe injuries to her hip and thigh and was at risk of bleeding to death without urgent medical care, said a member of Avaaz, which has been working with journalists and activists inside Syria.

“We are desperately trying to get her out, doing all we can in extremely perilous circumstances,” the source said.

French Foreign Minister Alain Juppe said a Syrian army ceasefire to give rapid access to humanitarian aid was “imperative,” adding that the response by the Syrian government to the wounding of Bouvier was insufficient.

Residents fear Assad will subject the city to the same treatment his late father Hafez inflicted on the rebellious town of Hama 30 years ago, when 10,000 were killed.

The army is blocking medical supplies and electricity is cut off 15 hours a day, activists say. Hospitals, schools and shops are shut and government offices have also closed.

In an effort to bring relief to hungry and bloodied civilians in Homs, the International Committee of the Red Cross was in talks with the Syrian government and opposition figures to seek agreement on a daily two-hour cessation of hostilities.

U.N. humanitarian chief Valerie Amos will head to Syria soon in an attempt to secure access for aid workers.

The worsening humanitarian situation in Homs and other embattled towns will dominate “Friends of Syria” talks in Tunis on Friday involving the United States, European and Arab countries, Syria’s neighbor Turkey and other nations clamoring for Assad to halt the violence and relinquish power.

Assad has called a referendum for Sunday on a new constitution, to be followed by multi-party elections, which he says is a response to calls for reform. The plan is supported by Assad’s allies Russia and China, but Western powers have dismissed it and the Syrian opposition has called for a boycott.

Army bombardments on the town of Khan Sheikhoun, north of Homs on the Damascus-Aleppo highway in Idlib province, killed two people on Wednesday, the London-based Syrian Network said.

Elsewhere in Idlib, seven people, including a five-year-old boy, were killed by gunfire during security force raids, according to the Syrian Observatory for Human Rights.

Although some say support around Assad is crumbling, others say he could hang on for many months more if he is ever to join Libya’s Muammar Gaddafi, Egypt’s Hosni Mubarak, Tunisia’s Zine al-Abidine Ben Ali and Yemen’s Ali Abdullah Saleh on the list of leaders deposed in the “Arab Spring.”

There are also fears the revolt could flare into a religion-based civil war and spread across the volatile Middle East.

The United States, which so far has been against military intervention in Syria, has hinted that if a political solution was impossible it might have to consider other options.

“We do not believe that adding to the militarization of Syria is the right approach,” White House spokesman Jay Carney told reporters on Wednesday, but he reiterated that Washington was not “ruling actions out in the future.”