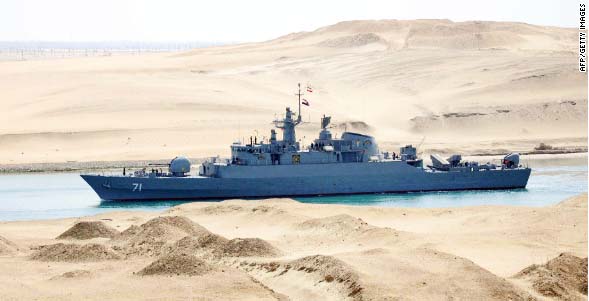 Rick Francona: As the internal security situation in Syria continues to deteriorate and the nuclear standoff with Iran becomes more bellicose, there has occurred a conflation of the two crises into one overarching problem in the region. It is virtually impossible to address one of the two issues now without either addressing the other or at least considering the larger regional consequences.

Iran is “showing the flag” in what it considers its sphere of influence in Middle East, and demonstrating its continuing support for its closest ally – the Ba’th Party regime of Syrian President Bashar al-Asad. Unlike Libya’s Mua’mar al-Qadhafi, who had no allies to support him against the Libyan popular uprising, al-Asad has a close ally in the Iranians, as well as enjoying differing levels of support from Russia and China.

It was both Russia and China who vetoed a United Nations Security Council resolution condemning the Syrian regime for the violence against its own citizenry. Although China’s steadfast support for the dictator may be waning somewhat, Russia continues to stand by al-Asad and sternly warn against any type of intervention in Syria.

The Syrian-Iranian axis goes back decades and is rooted in the Iran-Iraq War that raged for almost eight years from September 1980 to August 1988. Virtually every Arab nation except Syria stood with their fellow Arabs in Iraq against “the Persians” – the Iranians. Animosity between the Persians and Arabs goes back thousands of years. Syria, however, chose to ally with Iran. There were several reasons that drove the leaders in Damascus and Tehran into each others’ arms.

At the time of the outbreak of the war, the Syrian and Iraqi governments were both under the control of the Ba’th Party, however, the two wings of the party had taken different paths on the road to Arab Socialism and had developed an emnity that occasionally resulted in bloodshed. When Iraq invaded Iran in 1980, then-President Hafiz al-Asad (father of the current Syrian dictator) allied with the enemy of Baghdad. This is in keeping with the Middle East adage, “the enemy of my enemy is my friend.”

The initial relationship expanded into an economic and military alliance. In return for access to Syrian air bases allowing Iranian fighters to operate from Iranian bases east of Iraq and recover to Iraq’s west in Syria, Iran provided Syria with millions of barrels of oil that could be resold on the world market to prop up the weak Syrian economy. The two became closer as the war raged.

In 1982, Iran saw an opportunity to expand its sphere of influence into Lebanon, home of a sizable – and growing – Shi’a Muslim population. It did this by deploying members of its Islamic Revolutionary Guard Corps (IRGC) to Syria and Lebanon. That organization, the IRGC Syria and Lebanon contingent (IRGC/SL) was the nucleus for the creation of the now notorious IRGC Qods Force, an elite covert/special operations unit.

The IRGC/SL group, based in a suburb of Damascus, moved into Lebanon’s al-Biqa’ Valley and created the Party of God, more commonly known by its Arabic name – Hizballah – to combat the Israeli invasion of southern Lebanon launched to rid Israel’s northern border of the threat of attack from Lebanon-based Palestinian guerrillas.

As it turned out, Israel merely traded one threat for another, the Palestinians for Hizballah. Hizballah was much more lethal, as history has shown – the 2006 war between Hizballah and Israel is a prime example. After that war, Iran and Syria completely replaced all of Hizballah weapons, this time with even more capable rocket and missile systems.

Training, funding and resupply of Hizballah was routed through Syria, mostly via the international airport in Damascus – that support continues to this day. The ability to use Hizballah as a proxy force against Israel, by either Damascus or Tehran, is an integral part of the foreign policy of both Syria and Iran and is key part of their relationship. Should the al-Asad regime fall, Iran would be hard-pressed to control or maintain Hizballah, and its influence in Lebanon would be compromised. Iran is not about to let a major component of its foreign policy disappear without a fight.

Although the Syrians and Iranians have had economic and military cooperation agreements in the past, since 2005 they have had a formal mutual defense treaty, pledging to come to each other’s defense it the other is attacked. An Israeli attack on Iran will theoretically trigger a Syrian response against Israel. That response will also likely include Hizballah attacks from southern Lebanon.

The Syrian military at this time, however, is focused on maintaining order in the country and repressing a popular uprising. Would they have the capability to launch attacks on Israel as well? Would the Syrian opposition abandon their protests against the regime and temporarily unite against a common enemy? Or would they take advantage of the situation and continue to press for the overthrow of Bashar al-Asad?

On another front, if there is Western or Arab League intervention in Syria, would Iran attempt to oppose it militarily? If Arab League forces attempt to move against the Syrian regime, will Iranian forces mount attacks on those countries in support of its Syrian ally? If American forces are involved, will Iran strike American interests in the Persian Gulf?

Again, I’m pretty good at posing the questions, but don’t have the answers.

It is important for anyone trying to assess available options to address either the Syrian repression of its own population and the Iranian nuclear weapons program that these are no longer isolated issues. Addressing one will also require addressing the other, or at least taking into consideration the consequences of one action on the other crisis. Specifically, attacking Iran will require consideration of the reactions of Syria and Hizballah. Likewise, intervention in Syria will have to take into consideration what Iran will do.

Let me guess – the Iranians will agree to talks, while their centrifuges spin and their allies in Damascus continue to kill their own people.

← Experts Question Predictions on Iranian ICBM
MIT versus the Mukhabarat →